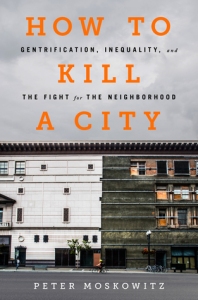 Moskowitz offers his thesis: “Gentrification is not about individual acts; it’s about systemic violence based on decades of racist housing policy in the United States that has denied people of color, especially black people, access to the same kinds of housing, and therefore the same levels of wealth, as white Americans. Gentrification cannot happen without this deeply rooted inequality; if we were all equal, there could be no gentrifier and no gentrified, no perpetrator or victim. Gentrification is also the inevitable result of a political system more focused on the creation and expansion of business opportunity than on the well-being of its citizens” (5).

There is a good balance between the personal stories of those directly affected by gentrification and the historical-sociological background from which gentrification arose. He ultimately argues that “American development has always hinged on the idea of a conquered frontier.” So, “to fight gentrification is to fight American thinking.” He concludes, “gentrification is in our blood” (215).

I believe Moskowitz has successfully argued his thesis. He nails the prognosis. Where the book fails, is in the cure. Moskowitz basically sees socialism as the only way forward. He offers a few brief thoughts on how to curb, if not all together stop, gentrification. The irony of his suggestions is that he sees government – which throughout he argues as the very creator and promoter of gentrification – as the Savior from gentrification. I don’t know how thought through that is.

In a capitalistic society, since gentrification is driven by dollars, I don’t see it subsiding anytime soon. But I do believe, as Moskowitz argues, that it will eventually reach a saturation level where it implodes upon itself.

Toward the very end he hints at what I believe is a better way forward. He states that after feeling depressed about gentrification in New York (where he lives) he decided to make a concerted effort to get to know his neighbors. This helped him become more connected, “a way to reorient myself in the city.” “They [steps to knowing neighbors] helped me see myself, and my city, as connected entities that are capable of changing each other. I began to appreciate New York more now, and so I am more willing to fight for it” (217).

As a white guy, living in a once predominantly African American, but now heavily gentrifying neighborhood, I greatly enjoyed this book. I see elements of my city (Philadelphia) and neighborhood in New Orleans, Detroit, San Francisco, and even New York. And as a pastor, I see the way forward through gentrification in the Gospel. “Only Jesus can restore the city without gentrification” (Shai Linne). And it begins with getting to know your neighbor. Loving and caring for them. There is a place for Christians to play in gentrifying neighborhoods. Hopefully, not so much as the gentrifiers, but as ones who will fall in love with their neighborhoods, love their neighbors, as Jesus commands, and seek to show forth unity in the midst of systemic racism.

When men, women, and children of different socio-economic, racial, and age groups gather together unified in the worship of one Lord, sharing one faith, a precedent is set. The dividing wall built up through gentrification may be broken down, even if only in a few small places, through the good news of the gospel of Jesus Christ.